As PEDOT:PSS has an extremely high conductivity and works in the form of a thin film, it is almost invisible when the film is formed. When the conductivity is adjusted, Denatron can be used in a wide range of applications, including antistatic layers (layers to prevent the accumulation of static electricity), transparent electrodes, and biomedical electrodes.

It can be applied as a coating in general wet processes and heat-treated at a relatively low temperature to form a coating film.

Denatron is a water- or water/alcohol-based conductive coating that mitigates environmental burdens.

Denatron "Type-C" based on Nano Carbon has been joined our line-up. Since having the better weather resistance than PEDOT / PSS, it could be used in a wider range of applications. Not only water based but also organic solvent-based items are available.

PEDOT:PSS is a kind of conductive polymer, and its name is an abbreviation for the names of a complex substance consisting of poly (3,4-ethylenedioxythiophene) (PEDOT) and poly- styrene sulfonic acid (PSS).

PEDOT:PSS is superior in stability, transparency, and film-forming properties compared to other conductive polymers. 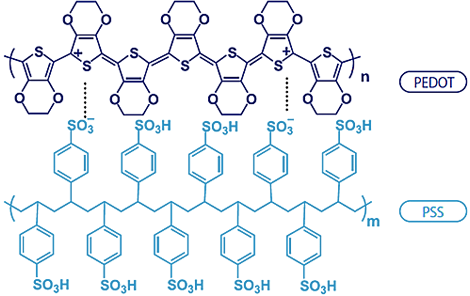 Bipolarons (dications) that are generated by PSS extracting electrons from PEDOT move inside molecules and also hop between molecules, so that electricity can flow.

Highly hydrophilic PSS acts as a dispersant and stably disperses PEDOT in water by keeping the PEDOT in the form of multi-molecular gel particles ranging from about 10 to 200 nm in size.

What is Nano Carbon?

There are various types of Nano Carbon such as Fullerene, Graphene, and Nanotubes. Unlike PEDOT, Type-C is produced by using special dispersants and special dispersing machine.
The dispersed nano-sized particles bring its highly transparent.
In addition, it has the excellent weather resistance due to its C-C bonds.

As the electrical conductivity of PEDOT:PSS can be adjusted, the development of PEDOT:PSS is being advanced in a wide range of fields. For example, PEDOT:PSS is used to impart antistatic characteristics to the surfaces of plastic, glass, and other materials, and also in various applications such as touch panel switches and electrolytic capacitors.

It can be used in water-based coating materials and contains no harmful metals, which makes it an eco-friendly material. In addition, since it is harmless to human health, its applications are expected to include electrode materials that come into contact with skin.

We started to develop coating agents using conductive polymers ahead of all other companies in the world 20 years ago and established our own advanced formulation technology. Their first application was antistatic coatings for optical films. These gained a good reputation as transparent antistatic layers for optical films that had suffered from trouble with dust in the manufacturing process, which made the start of our business successful.

We are now expanding our business activities in the field of transparent electrode applications, in addition to antistatic applications. By continuously accumulating know-how in development, manufacturing, and quality control, we will continue to move forward as the most reliable supplier for our customers.

Based on our research from actual results in related markets 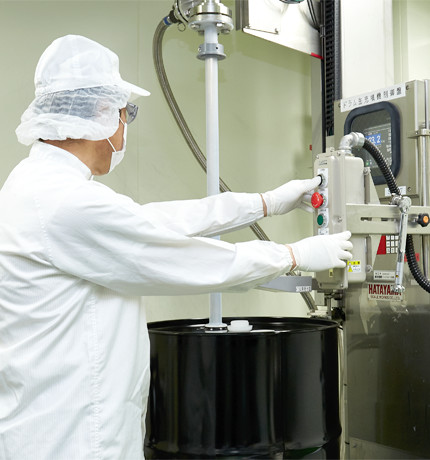